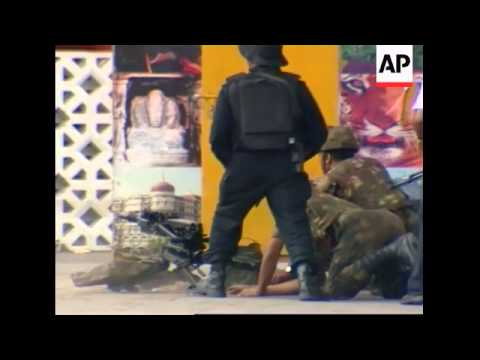 SHOTLIST
1. Wide of Taj Mahal Hotel, with media in foreground
2. Indian security forces
3. Soldier on the ground
4. Security forces taking positions
5. Police
6. Security
7. Hotel room window with light on
8. Soldier carrying heavy weaponry to position near hotel, puts it on ground
9. Wide of hotel
10. Soldier firing at hotel
11. Wide of hotel
12. Soldier firing again, pan to smoke emerging from impact
13. Ambulance arriving, injured man being led inside it
14. Ambulance leaving
15. Injured woman approaching ambulance
16. Ambulance leaving
STORYLINE
Explosions and gunfire continued intermittently at the luxury Taj Mahal hotel in Mumbai on Friday after more than 150 people were killed and 370 injured when suspected Islamic militants attacked 10 sites in the city starting on Wednesday evening.
On Thursday officials had said the Taj was cleared of gunmen and 400 people had been brought out of the hotel.
But on Friday morning, army commanders said that while three gunmen had been killed, up to six were still inside with about 15 civilians.
A few hours after that, a security official said at least one gunman was still alive inside the hotel and had cut off electricity on the floor where he was hiding.
Shortly after that announcement, another round of explosions and gunfire were heard coming from the hotel.
Indian forces began launching grenades, and sporadic exchange of gunfire could be heard.
At one point, media with positions outside the Taj started to retreat as the fighting went on.
Reporters at the scene said two journalists appeared to have been injured as a result of gunfire exchange.
An unidentified member of India’s Marine Commando said the Taj was filled with terrified civilians, making it very difficult for the commandos to fire on the gunmen.
As night fell, some parts of the building appeared to be on fire.
Indian media reported that fire broke out in a 1st floor suite of the hotel.
Explosions were heard from inside a room which was burning, and smoke was rising from the rooftop of the hotel. It was not immediately clear whether the room on fire was the 1st floor suite.
Several firemen attempted to enter the building.
At least eight foreigners are known to have been killed so far and 22 more have been injured, two of them Americans, officials said.
The dead include three Germans, and one person each from Japan, Canada and Australia.
The nationalities of two more are unknown.
The injured include five from Britain, three Germans, two Americans, two from Oman and one each from Norway, Spain, Canada, Finland, Philippines, Australia, Italy and China.
Two more were unknown.
A top official in Maharashtra state, said that by Friday evening, at least nine gunmen had been killed, and one had been arrested.
Keyword Mumbai Attacks

You can license this story through AP Archive:
Find out more about AP Archive: